Early temporary settlements in the Isles of Pretani are:

This is an ancient site in North Yorkshire, England and although it now lies under farmland prior to this usage archeologists found many ancient artefacts used by the Pretani hunter-gatherers such as, Britain’s oldest structure, red deer stag skull-caps that may have been head-dresses as a hunting disguise and nearly 200 projectile, or harpoon, points made of red deer antler. These materials have been preserved as they were buried in waterlogged peat.  Waterlogged peat prevents organic such objects from oxidising.

There is evidence which would indicate this site was only used in late spring and summer so potentially it was a hunting camp. The remains of the structure revealed post holes that were almost certainly made of wood with a sunken area containing flints indicating the presence of a structure approximately 11ft or 3,5 metres wide. A large wooden platform has been discovered, the earliest known example of carpentry in Europe, though its purpose is as yet unknown.

Howick lies just inland from the North Sea in Northumberland, England’s most northerly county. The site was discovered by the identification of flint artifacts found in the cliffs. Once the site was fully excavated it was indicated this settlement site is one of the earliest known in northern Britain settled by hunter-gatherers.

One of the best documented sites of early human habitation in the island of Ireland is Mount Sandel in Coleraine County Londonderry.  It is the oldest known site of human occupation in Ireland and was excavated by Peter Woodman in the 1970s. There is evidence of small circular domed structures that may have been inhabited for several seasons during the year.

Early permanent settlements in the Isles of Pretani are;

Is an ancient human settlement found on the largest island within the Orkneys. It consists of eight houses and is older than Stonehenge and the Great Pyramids. The people raised cattle and sheep, fished and there is evidence that barley was cultivated.

The Ness of Brodgar, Orkney, Scotland

This ancient site has revealed buildings both ritual and domestic. It includes what is believed to be an ancient temple complex, one of the largest ancient structures built in Northern Europe built between 3,300 and 3,200 BC. Pottery, cremated animal bones, stone tools and polished stone mace heads have also been discovered

This is a site on the St David;s peninsula, Pembrokeshire, Wales where the remains of ancient rectangular and circular dwellings are found. Pottery, polished stone axes and animal bones were also discovered.

Where a circular or oval depression can be seen in the ground with evidence of a low stone wall it indicates the foundation of a roundhouse and one of the best known sites is Grimspound in Dartmoor, England.

Grimspound settlement on Dartmoor consists of a set of 24 hut circles surrounded by a massive granite perimeter wall and is found on Dartmoor in Devon, England. It was settled around 1300 BC and the roundhouses were built of a double ring of granite slabs with a rubble infill, a technique still used in dry-stone walling today

These were structures built in lakes, rivers and estuarine waters of Scotland, Wales and Ireland. As crannogs were built on water in the Isles of Pretani around 2500 to 800 BC they formed artificial islands. The walls were made of stone or wooden posts joined by wattle and daub. This is a building material used for making walls in which a woven lattice of wooden strips called wattle is daubed with a sticky material usually made of some combination of wet soil, clay, sand, animal dung and straw. This style of material is still an important construction material in many parts of the world. 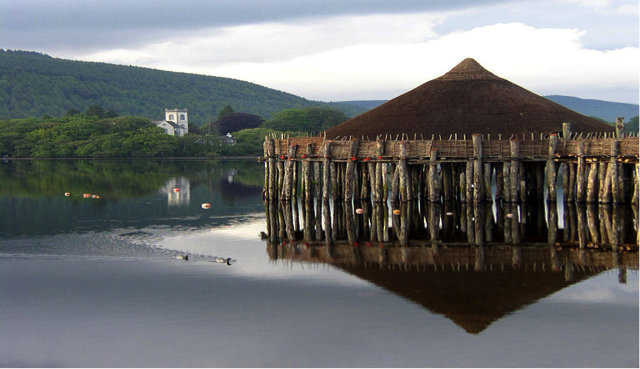 Remains of crannogs have been found at Lough Gur, a lake in County Limerick, Republic of Ireland.